In this Mini-Course you will get my favourite strategy:
“The Mean-Reversion Trade”.

I give you this complete strategy for free.
So now YOU can enjoy these profitable trades too!
Why? To prove to you I am worth your time.

And that’s not all!
At the end of this Mini-Course you will get my Scanner.
(It scans the market for these trades).

Without further ado let’s get started.

Reversion to the mean

This Mean-Reversion Trade is like cherry picking. But before digging deeper into the trade’s strategy itself, I will first focus on the statistical phenomenon behind it.

Another word for mean is normal. What is normal? I focus on what is normal, in order to find what is abnormal. I am looking for extremes, for irrational price behaviour.

The statistical phenomenon I am referring to is the “reversion to the mean”.
This is about price moving away from averages at highs and lows, but eventually returning to the mean again.

Most of the time a coin moves within a particular range, be it up, down, or sideways.
When price is normally distributed within this range, then you can expect deviations to reverse back to the average. As you also see this in the statistical concept of the normal distribution. At the middle of this bell shaped curve you’ll get the highest probability. At the edges you get the lowest probabilities.

The “normal” is that part of the measured data that occurs the most frequently.
On a price chart  this means we have an average price, and price deviating above or below it. In uptrends it deviates more to the upside of the average, and in a downtrend more to the downside.

Crypto markets (and many other markets) aren’t really normally distributed.
Although it looks like that often. Price can deviate far more from the mean, than a statistical “standard deviation”. Crypto is a really volatile and unpredictable place. You never know what the market will do next, always keep that in mind.

But by filtering mean-reversion setups for strong and early trends you actually take advantage of the volatility, and get very high probability trading opportunities.
It is my favourite trade!

How do you trade this?

When price deviates from the mean, we have an opportunity to trade the reversion-to-the-mean. To trade such a mean-reversion, we need to know the average price over a previous period. How do you know the average in an up- or downtrend? By using the right moving average.

All this can be deduced by using the right moving average.
I prefer to use the 50 period Standard Moving Average (SMA50).

These reversion-to-the-mean trades, also called “mean reversions”, are my highest probability trades. These are the trades I love the most.

In the next chart example, the red bar stretched away from the mean, the green bar is the pullback back to the mean:

In a strong uptrend price moves well above the SMA50, while the SMA50 will be sloping upwards. The stronger the uptrend, the steeper the slope of the SMA50, and the further away price will move up from the SMA50. So when you see a steep upsloping SMA50, but price is below it, you know you have an abnormal situation that has deviated from the mean, and has a high probability (statistically) to return to the mean. This is the anomaly we look for.

This gives me a simple set of trading rules.  When buying a mean-reversion opportunity, you want:

It is very important that these conditions are still met at the moment of entry:

^^ THIS IS PROBABLY THE MOST IMPORTANT IMAGE IN THIS MINI-COURSE ^^

So that the SMA50 is still sloping upwards at the moment of entry is of the essence!!

I determine the timing of my entry using my 7-step system.
More in-depth information about how I determine my entries in the Pro Course!

The chart below illustrates how the EMA15 (orange line) often acts as resistance. 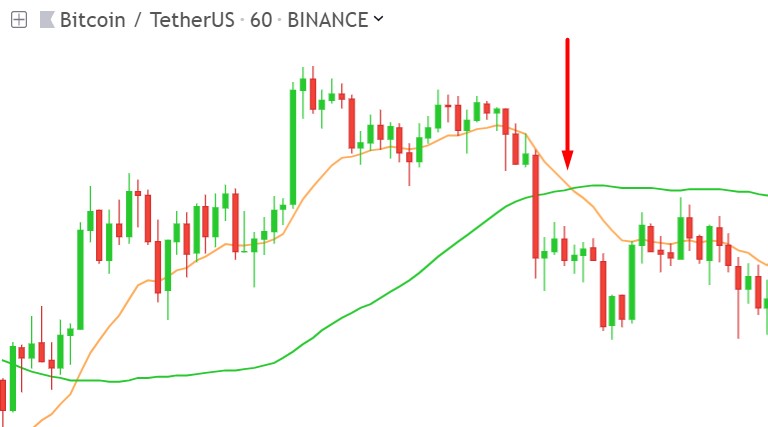 You see price drops below an upsloping SMA50, this respects our mean-reversion rules, BUT soon the EMA15 also drops below the SMA50 and holds price down. So my rule of thumb is to target your exit just below the EMA15. I use that as take profit level in 90% of these trades.

Btw. This is a trade I just made, this is what mean-reversions are all about: 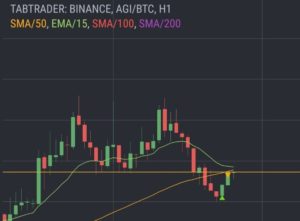 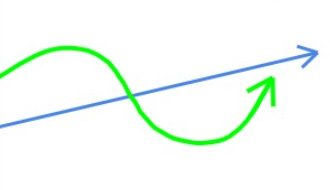 Not only the SMA, but as I have shown you the EMA15 also plays a big role in the behaviour of the mean-reversion: 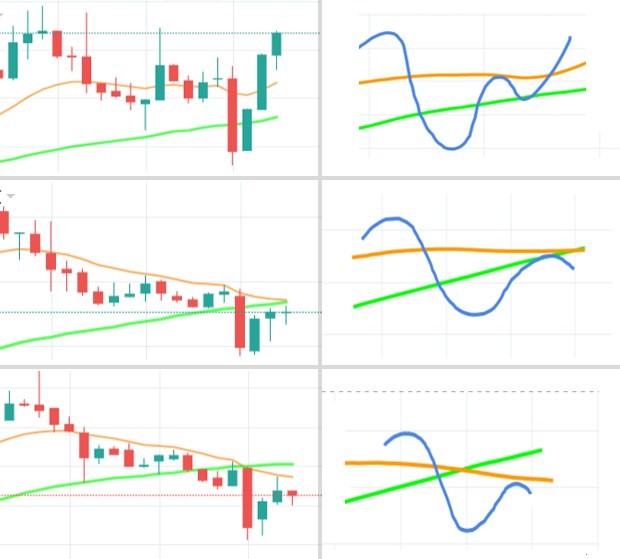 This led me to some extra conditions, in order to find the premium mean-reversion opportunities:

This doesn’t mean that my earlier basic conditions (price below SMA, and SMA sloping up) are no longer valid. This is just to know the difference in higher and lower probability mean-reversion setups.

A simple example that meets these new conditions: 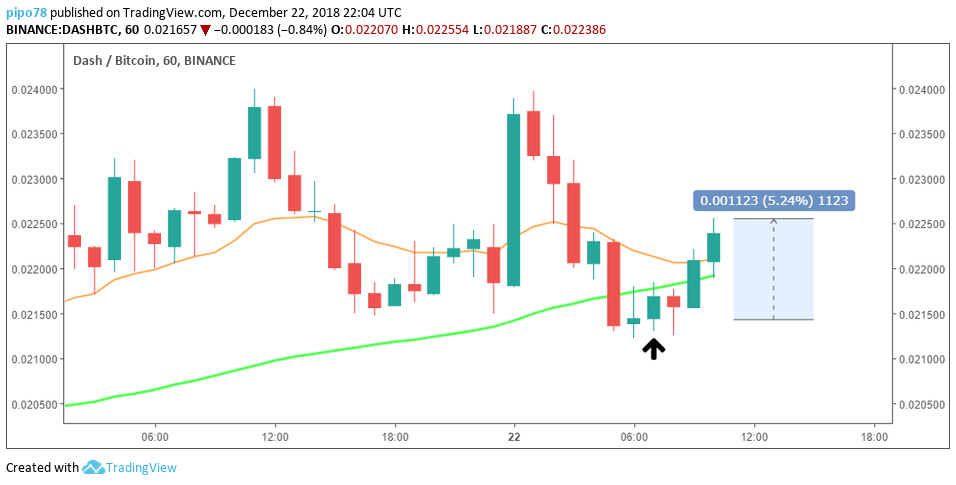 When EMA15 is below the SMA50, at the moment you enter, it is a lower probability trade and doesn’t always give you a good bounce. It often bounces to the EMA15: 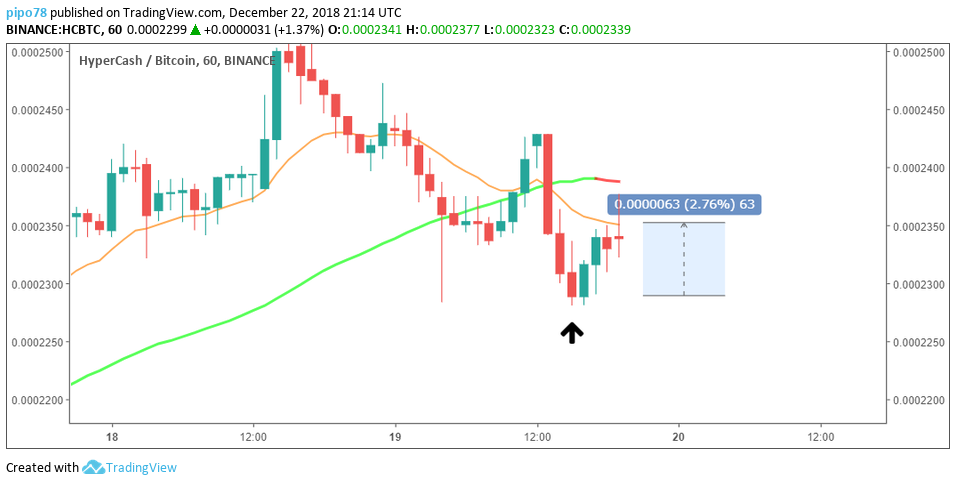 That’s also the reason I put my TP just below the EMA15 most of the time.
And if it does bounce beyond the EMA15, chances are still high it will remain below the SMA50, as it will more often get exhausted: 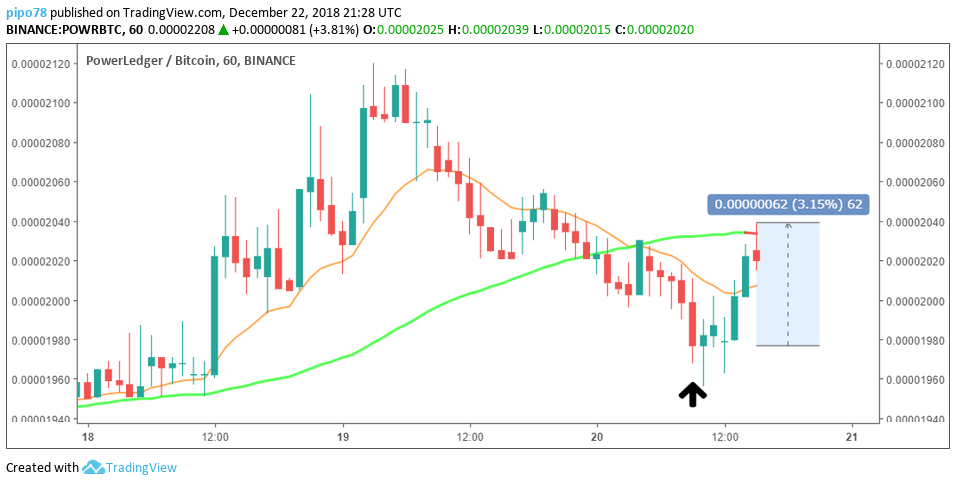 Below is a chart where you can compare both these setups. An example of the difference between a higher and lower probability mean-reversion setup. 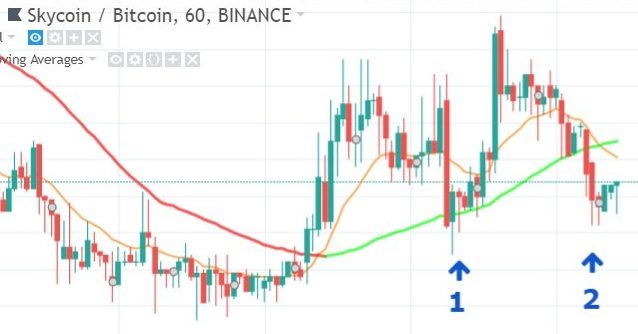 As many of you know I am a big fan of Quickfingers Luc. He was a big inspiration for me as a Crypto Trader and as a person.
There are some similarities between QFL’s trades and my mean-reversion trades.
Just like in QFL’s trades, in my mean-reversion trades you also have the highest probability in case of a fast panic drop below the support. Moving averages, and especially the SMA50 behave as support in uptrends (and resistance in downtrends).

In QFL’s trades you look for the strongest supports (bases), and in my trades I look for the strongest supports also. Let me explain.
Moving averages are considered to be dynamic supports. And the steeper the slope of the SMA50, the stronger its uptrend support.  So by aiming for the steepest moving average slope, I am actually looking for the strongest moving average support. So the main difference with QFL, is that I use dynamic support zones.
But this doesn’t mean I don’t use support zones. S/R zones should be at the center of any trading method. S/R zones and chart structures are actually the most important element in my trading method. Always know the story of the chart 🙂

Besides that many traders consider the SMA100 and 200 as very important supports and resistances, and always keep an eye on them. So do we.

On the next chart example you can see how you can get mean-reversion opportunities on multiple period SMA’s on the same chart. 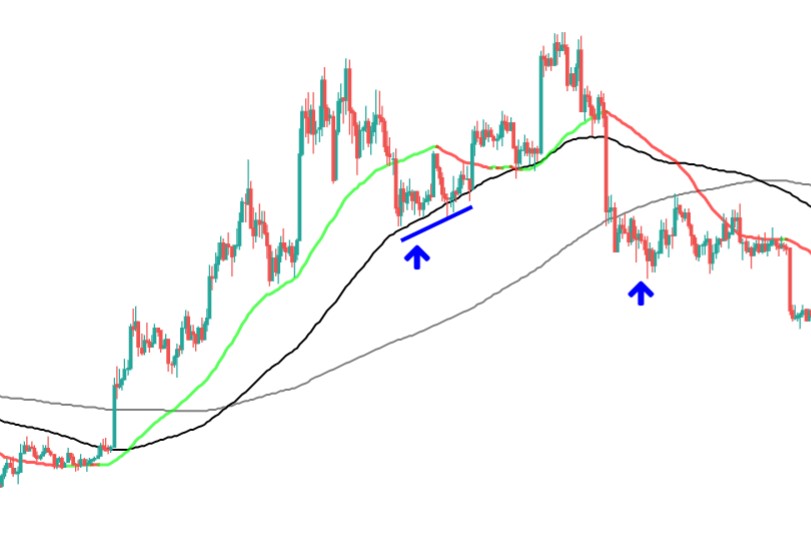 (green/red line = SMA50, black line = SMA100, grey line = SMA200)
Below another example to show you how these SMA’s interact in mean-reversion setups: 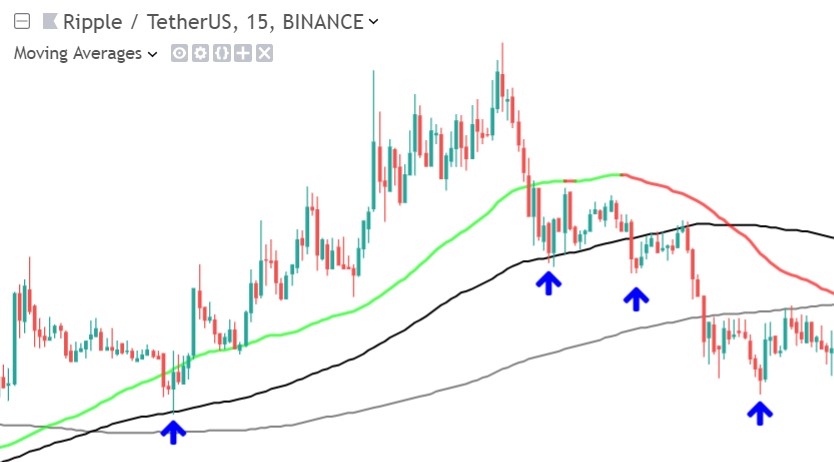 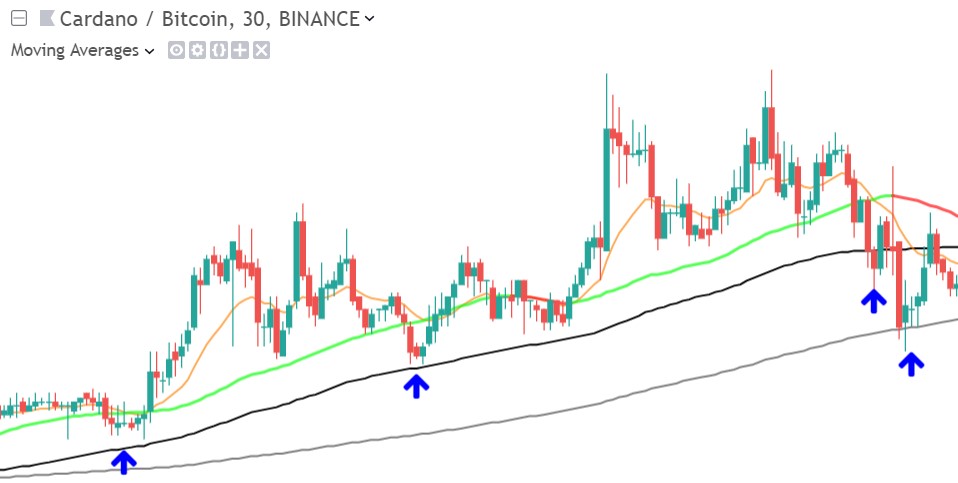 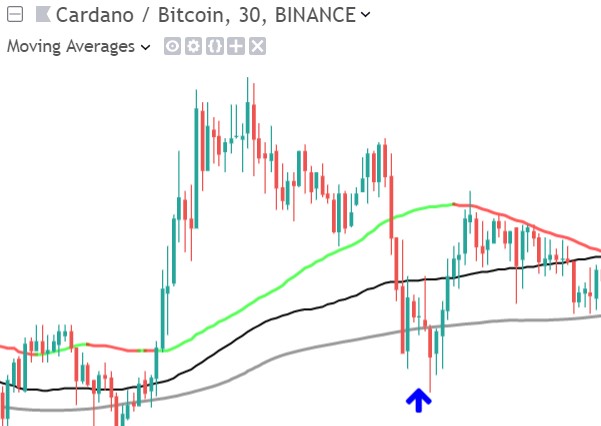 Those are amazing opportunities. 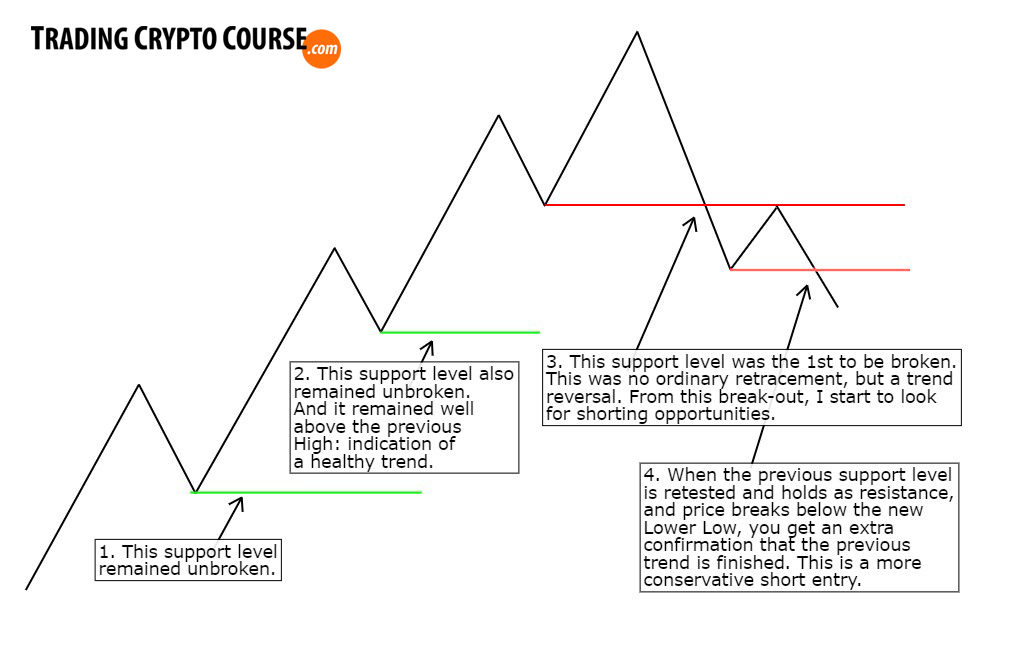 Next I have added a SMA50 (50 period simple moving average) to the same chart. This shows me 2 mean-reversion opportunities. This chart is meant to show you that mean-reversion setups late in a trend are very dangerous, and often result in a trend reversal.
You see that using only the slope of the SMA50 as indication of the trend can be dangerous if used without proper reading of the structures on the chart. 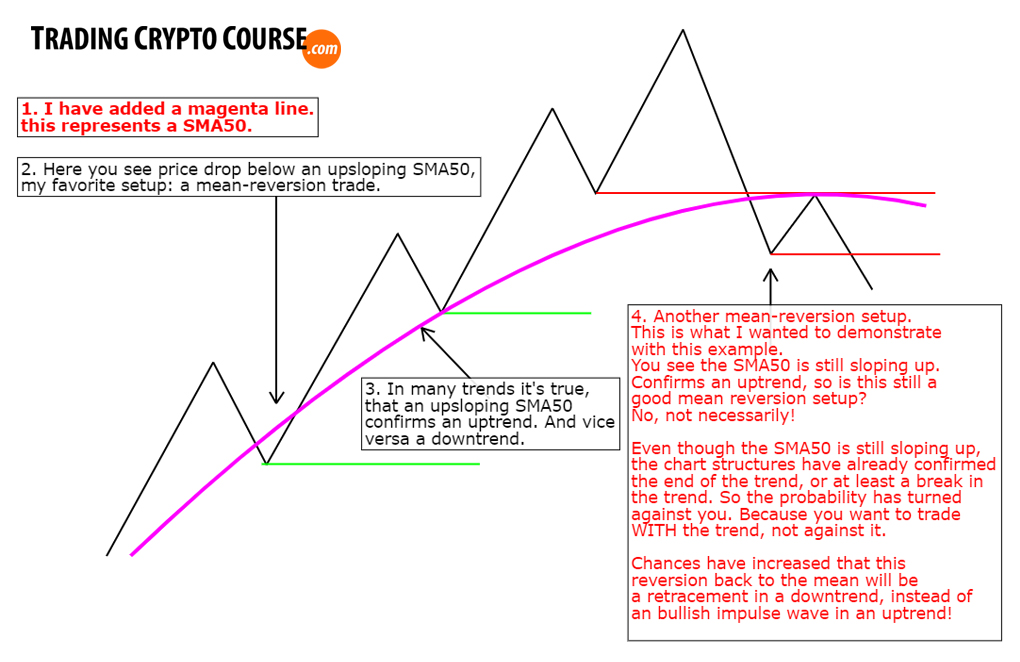 So the conclusion is that chart patterns are very important when trading mean-reversions. Because when there is a divergence between the slope of the SMA50 and what the structures on the chart tell you, then it could be a reversal instead of a retracement, and a VERY DANGEROUS mean-reversion setup.
But it could be an excellent trend reversal signal: in the above example a perfect short entry. This is why I see mean-reversion trades as being inextricably linked with trend-trading.  More about trend-trading in the Pro Course!

When you are already late in a trend (after 3 waves up), you should be more careful about these mean-reversion setups, as I already mentioned in the previous paragraph. A drop below the SMA50 will more often be in the form of a complex abc retrace. Based on Elliott waves I use this template as how the average trend looks:

The trend often consists of 3 cycles, after those the probability for trend continuation is lower and retraces will be more often complex abc retraces.

I trade mostly on an 1 hour chart, and for the higher timeframe confirmation I often use a 4 hour chart. My base currency is BTC, and when the market is down I try to move to USD.

Successful mean-reversion trades are trades that returned upwards to the Mean (ema15 or sma50), while the Mean was still above entry level (break-even).

You are now ready for my final gift to you in this Mini-Course, my Free Scanner:

Go to the Scanner

This Scanner is programmed to find possible early mean-reversion opportunities on Binance.

Use the strategy from this Mini-Course to find the best entries.
For higher precision entry strategies please consider the Pro Course*.
The scanner signals are not entry signals**

P.s. if you have any question about this trading strategy, or about the scanner, please ask! You can use the live chatbox in the bottom-right corner, or leave me a message on the contact page.

** The Scanner scans the Binance Exchange for these amazing mean-reversion opportunities.
It scans for mean-reversions based upon the SMA50, SMA100 and SMA200, on the 1H timeframe.
It alerts you when price is below an upsloping SMA. But you still need the right skills to get the most out of these signals. Skills YOU have largely mastered by now.

The scanner doesn’t give trading or investment advise, as nothing in this website constitutes financial advice.
The content on this website is only about how I read charts using technical analysis.
Please trade and invest responsibly and do your research with due diligence.