Indicators, tools such as moving averages and MACD, are used by traders to analyze historical prices, predict future trends and provide trade signals.

The data that indicators use, is pure price-action. So any debate about which is better, price-action or indicators, is pure nonsense. I use them both, and so should you 🙂

Indicators are just tools that use mathematical formulas to metamorphose price-action into another visual form on a chart or oscillator. Indicators use the same open, close, high and low candlestick data that you see on the chart itself. Indicators are formulas that look for more complex relationships within the data, than most traders will get out of a chart.

There are basically 2 types of indicators,

But how do you know the trend using only price-action?

Below an example of ranging price action:

Below an example of uptrending price action:

Below an example of downtrending price action:

As you can see in case of a sideways ranging market, this is not always “easy” to see on a naked chart.

So which indicators do we use to measure the trend?

In the lesson about trendlines I already mentioned the use of moving averages as dynamic support and resistance lines in trends. In this lesson I will talk about moving averages from an trend-indicator point of view.

A moving average is plotted as a line on your chart. It is an average over a previous period. This makes it a “lagging” indicator. It works best in a trending market, hence it’s use as a trend-indicator.

Below for example the longer 200 period SMA (Simple Moving Average) on a daily Bitcoin chart:

This is obviously a long-term downtrend. But if we shorten it to a 50 period SMA, and look at it on a 4 hour chart, we get this:

A short-term downtrend. So a longer period MA shows you trend over a longer period of time, the smaller trends often even disappear from it.
So using multiple MA’s we can determine the dominant long-term trend over the past months, and short-term trends that happened inbetween. So it is very important to look at timeframes when using MA’s to measure the trend.

You can also determine the strength of a trend using Simple MA’s.

When trading with MA’s people often use the crossover rule:

But in reality this is not a complete trading system at all. Often you get “whipsawed” (or “whipped”), when price makes a fake breakout. Whipsaw refers to price being “noisy”: price quickly moving up and down through the MA, a whipping action. In the volatile crypto markets this is very common. Unfortunately trends aren’t always as clear and clean as in the above example 🙁

When applied to large timeframes, then these crossovers form major market reversal points, and are called:

Usually these crossovers are made by the SMA50 crossing over the SMA100 or SMA200.

This is a rule-based system (opposite of a discretionary system), you just wait for a crossover to happen. Using 2 moving averages lies at the hearth of another trend indicator: the MACD.

The MACD is a very popular indicator. It is a trend indictor (and is also used to measure momentum). As said this indicator is based upon the crossover of 2 moving averages. When you have a swing high in price, and traders are waiting for the MA’S to crossover they notice how price first converges to the faster MA, and next converges to the slower MA. By the time the MA’s crossover, the high has already passed. And after a crossover the opposite happens: the 2 MA’s diverge from eachother.

As you know, MA’s are lagging indicators (calculated over a previous period), so MACD is also lagging, as it is composed of 2 MA’s. Thus having an early confirmation (convergence) of the trend is very useful.

The MACD can work with any MA setting, but the default setting is a 26 and 12 period MA. The MACD line is made by subtracting the 26 period MA from the 12 period MA.

Ok, so imagine you entered a long position. MACD line is going up. When do you exit? You want to anticipate the early signal of the converging MA’s. But when exactly? To make this less arbitrary and more rules-based, the inventor of the MACD added a trigger, a 9 period MA, based on the MACD line itself. So when this trigger-MA crosses below the MACD line, then you have your exit signal: 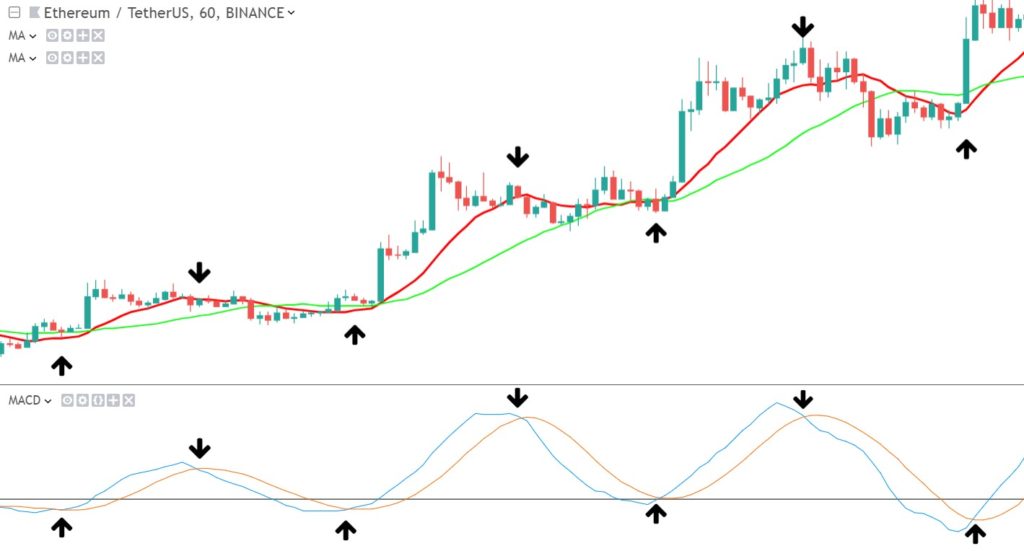 (added the red line in the MACD = 9 period signal line)

As you can see, you get the signal much earlier this way.

Most people use this crossover signal, but have no idea how to read the MACD any other way. That’s a shame, as the MACD has much more to offer: the Histogram.
The Histogram doesn’t have a clear trigger as we saw above. But it gives you more freedom in interpretation. The 9 period crossover trigger was a rule based system. The histogram is more of a discretionary system. You have to “eyeball” the chart and take conclusions on the patterns you recognize. But often it gives you something AMAZING in return: Although the histogram doesn’t give a distinct trigger, it has even more predictive properties, if you learn how to read it: 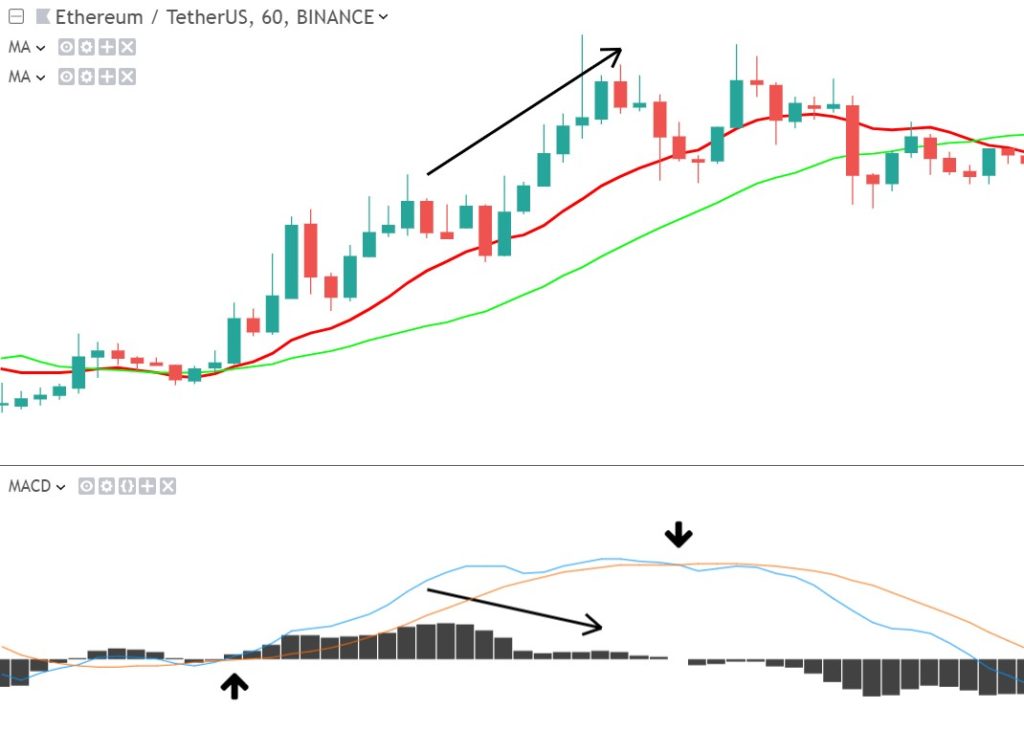 The RSI is also an “oscillator”, it is contained between 0 and 100. Therefore it provides us with some different information than the MACD. The RSI indicator is a momentum indicator and thus measures the strength of the market, “Relative Strength Index”.

One of the hardest things (trend and pullback) traders need to do, is to detect if a move down is a small retrace or an actual end of a trend. Small retracement vs. entire trend reversal/ end of the trend. Momentum can help with this.

The RSI is an “oscillator”, but it is contained between 0 and 100. Therefore it provides us with another perspective than the MACD. The RSI indicator is a momentum indicator and thus measures the strength of the market, “Relative Strength Index”.

One of the hardest things (trend and pullback) traders need to do, is to detect if a move down is a small retrace or an actual end of a trend. Small retracement vs. entire trend reversal/ end of the trend. Momentum can help with this. These days traders use momentum indicators like the RSI a lot. Some even base their trading decisions solely on momentum.

Traders (myself included) call the RSI a leading indicator. This might seem confusing, as the RSI is also based on past prices. RSI is no “holy grail”, it’s just measureing the speed and strength of the market. Most of the time the market is already losing steam, before the end of the trend is visible in the price. RSI measures this rate of change. People trade according to the RSI, so it also has a self-fulfilling nature.

In the next example you see 2 price swings. Both lasted the same amount of time, but swing A made a bigger move obviously. This is how momentum is calculated: the amount that price moved in a particular period. 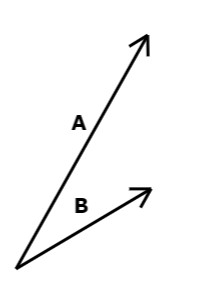 In physics momentum is mass x velocity. In trading momentum is just measured over past price change and there is no such thing as mass. A good approach is maybe to add volume to the momentum indicator (MFI indicator) as a replacement for mass. But the main difference is that in trading psychology plays a big role too. A panic drop can’t really be foreseen, that’s why it causes such panic and thus momentum.

So the RSI measure price changes. RSI is calculated over a lookback period, default this is 14 period. The longer this lookback period, the smoother the indicator line. The shorter, the closer it follows price. Even though the RSI follows price like a MA, it is not a trend indicator. When price drops lower or jumps higher, it just does so at a faster speed, creating the same move on the momentum indicator. When te market goes sideways, the speed at which price changes often changes much less, so the RSI also stays flat also.
A smoother line may visually look better, but a faster line responds better to price changes. But a fast RSI can cause more “whipsaw”.

As said the RSI in an “oscillator” type, bounded indicator, its value go from 0 to 100.
In reality it rarely touches 0 or 100, but more often turns at the 30 and 70 levels. Above 70 is called “overbought” and below 30 is called “oversold”. Many traders use these as buy or sell signals. But this is dangerous, as price can actually go much higher or lower. 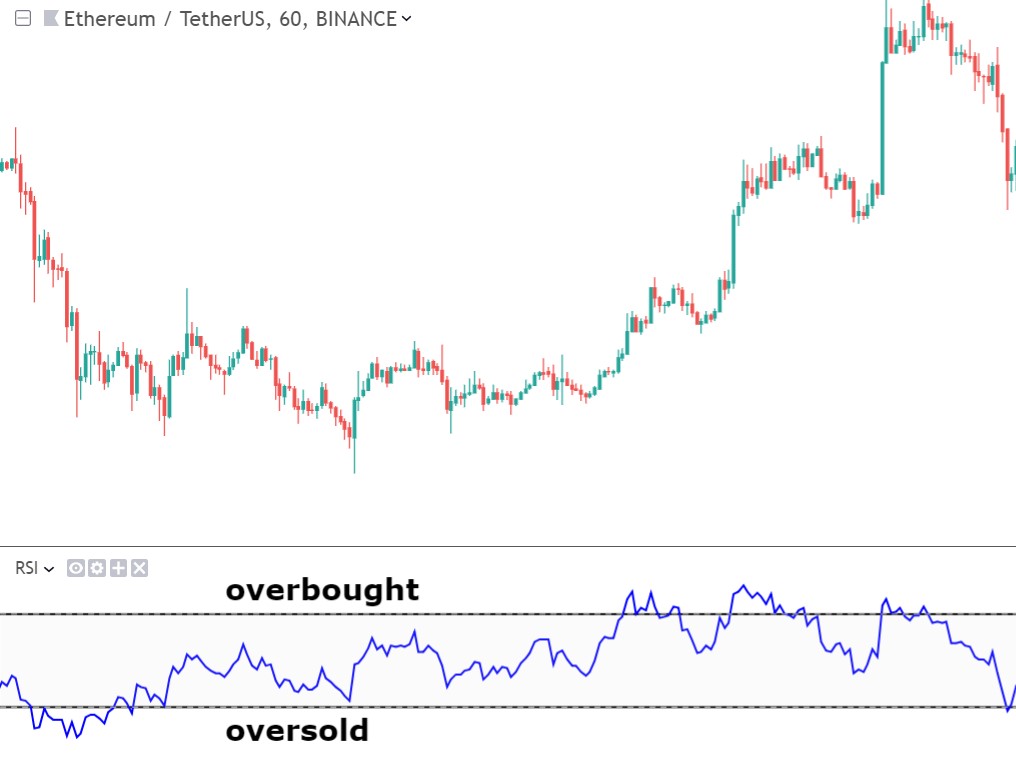 Especially in strong trends, RSI can remain in overbought/ oversold, while price reaches much further. But it is often true that price reverses to the downside, once it enters “overbought” territory and vice versa.

When I am trend trading I have the following (slightly personalised) rules regarding RSI:

Besides moving averages , MACD, RSI these are some other indicators that I will soon look into in my next posts:

Many people don’t know this, but plain old chart patterns are also indicators. As I already mentioned in the lesson about Chart Patterns, these patterns on chart can help you identify the next move. Like a “double bottom” gives you a confirmation that you have a buying opportunity. Some patterns are complex, and some are very simple. Look for example at these higher lows and higher high that signal an uptrend.

The 2 blue arrows indicate higher lows, and the red arrow indicated the higher high. Some Technical analysts call this a head-and-shoulders pattern, as you encountered in the Chart Patterns lesson. Works perfect, not? Now let’s compare this to some indicators: 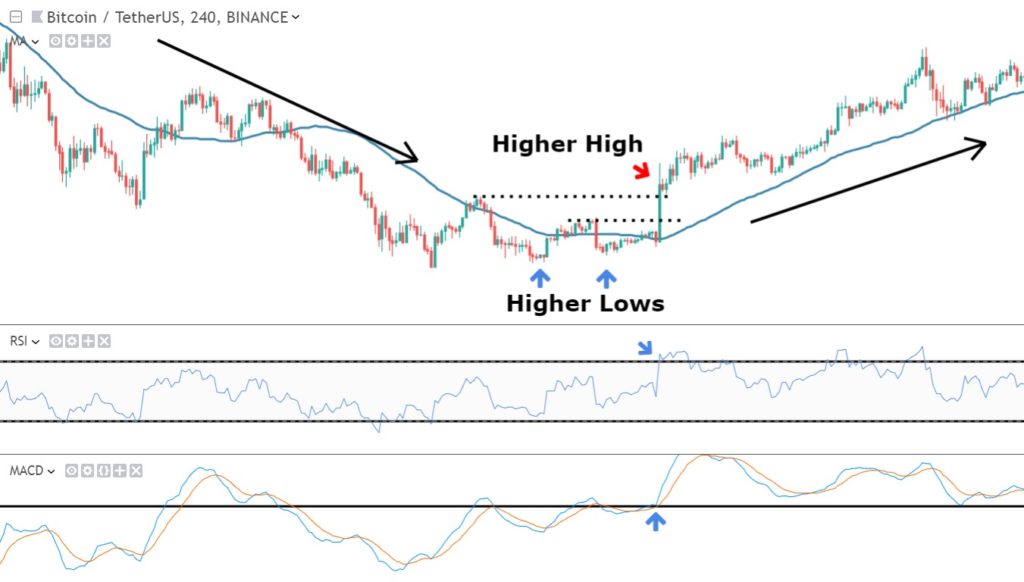 One more (very important) thing about chart patterns and indicators. If you combine chart patterns with indicators, then you can spot “divergences” between them. This actually one of my favorite trading signals!!!

In the next chapter I will give you an in-depth look into “divergences”.